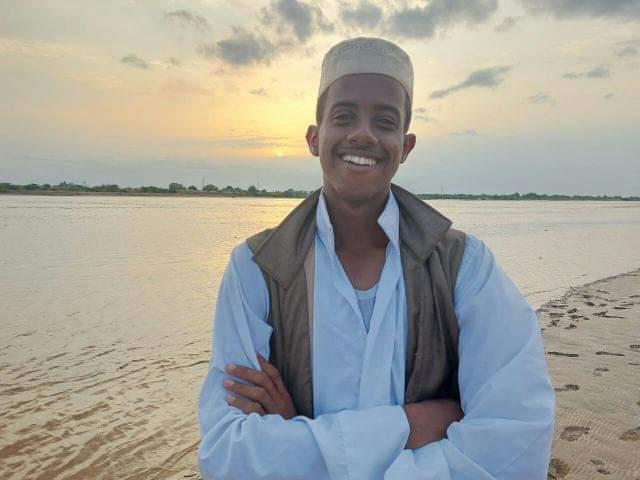 How did you become a climate activist?

Frankly, I knew and heard for the first time about the climate crisis when I was seven and watched a cartoon series about the planet and the challenges of future life under global warming, pollution and environmental crises caused by factories and unjust and polluted fossil empires. At that time, the term climate change was not a topic talked about in my country. The cartoon gave me facts and information about what was going on. Later I started googling on my mom's phone and learning more about global warming and environmental issues.

In 2018 I heard about Greta Thunberg and her climate strike and felt that this was the path I had to join. It represented me and the issues I cared about. At the beginning of 2019, Fridays for Future (FFF) began to grow, and our strikes and demonstrations were launched in many countries around the world, with one voice and one strong cheer calling for climate justice.

I joined FFF in 2019 and founded its branch in Sudan and launched workshops, discussions sessions, presentations and lectures in basic and secondary schools, colleges and universities. Unfortunately, there is not a single word about the climate crisis and environmental issues in students' curricula in basic schools. Millions of children do not know the reality and gravity of the crisis, despite being most affected by its catastrophic consequences, which are a daily reality in our country.

These awareness campaigns were conducted in dozens of schools. I was unable to hold demonstrations and strikes due to political constraints, repression and suppression of freedoms. Especially at the beginning of my activity before the fall of the regime of dictator Omar al-Bashir.

How is the climate situation in your country?

Climate change presents an existential threat to the Sudanese people. My country is one of the regions most affected by the climate crisis and this threat manifests itself in multiple aspects and dimensions.

The most serious dimension is the agricultural dimension. As part of the outcomes of the World Food Summit held in Rome between 13 and 17 November 1996, Sudan – along with Brazil, Australia and Canada – was among the countries that were hoped to fill the world's food shortage for its substantial agricultural potential. Sudan has an agricultural wealth estimated at 170 million arable acres, representing 40% of the Arab world's total territory, along with multiple water resources and abundant labour.

Unfortunately, all these wealth will be greatly affected by the climate crisis. IPCC reports, together with periodic reports from climate-specialized scientific institutes, indicate that Sudan will be severely affected by the climate crisis in the agricultural sector. Sudan's fertile soil will lose its advantages and become poor. This will affect millions of Sudanese who depend on their daily food and income for agricultural activity, which is the most important activity in the Sudan and on which approximately 70% of the population depends.

This means even darker famine and a food crisis that threatens the already overburdened Sudanese people with an economic crisis, a food gap and poverty that grips the vast majority of Sudanese whose income is only $1 a day.The agricultural crisis will also create civil crises and conflicts over pastures and fertile land.

The other dimension of the threat of the climate crisis is the devastating floods that the Sudan is experiencing from time to time, the worst of which was the Nile flood in 2020, which was catastrophic and devastating, causing the total or partial management of 100,000 homes, the killing of 100 people and the displacement of one and a half million people who became homeless. Desert sprawl also threatens dozens of fields and pastures, especially in the north.

In addition to the drought that has hit large parts of the country, which is also reflected in water sources for drinking and irrigation of agricultural land, summer temperatures also threaten record temperatures of up to 50 degrees Celsius, and throughout the year a minimum of 35 degrees Celsius.

All this makes my country one of the most affected by climate change. And in the absence of means of adaptation and mitigation, people will face dark scenarios in the coming years, especially with increased global warming of more than 1.5, which is expected.

What were your hopes for COP27?

To be honest, I did not have very high hopes, giving that the earlier COPs has not been very effective or showed us courageous, strong and successful outcomes. However, I hoped that the conference would be an opportunity to reverse the reality of the climate crisis, especially for us who are the most affected activists.

Spaces like COP enable us activists to showcase the reality of our climate crisis and seek ways to spread the voice of our peoples' suffering. But at the same time, it is hard for young activists to be heard if you are not famous or have extensive relations. This is the greatest obstacle for us young activists and I hope that this exclusive process will change and that we will be given a greater opportunity in the coming spaces.

Throughout my period in Cop27, I followed a number of limited negotiations that were open to us observers, all of which were slow, unproductive and did not suggest real and effective change. This was very frustrating because I did not expect such irresponsibility and the lack of a fighting and struggling spirit on the part of negotiators to reach a solution, especially from negotiators from the countries most affected by the crisis.

What do you think about the results at COP27?

This conference did not reach any clear, courageous and robust solution. Also, it was many limitations to climate action for us activists, and we felt in danger, especially when we were participating in the demonstrations. At the same time the conference is sponsored by actors like Coca-Cola. This sends a message about the organizers' lack of decency and their disregard for the issue.

COP27 did not speak openly and forcefully about the complete abandonment of fossil fuels. They merely repeated the same terms as before. Unfortunately, we as activists believe that the 1.5-goal died after this Conference.

How can countries like Norway play a constructive role before COP28?

Norway – as a state that produces a lot of fossil fuels – must support the path of total abandonment of fossil fuels and seek genuine and effective alternatives for tens of thousands of workers in the sector. It must begin the process of a just transition now without compromising, disrupting or postponing. This is both a moral and legal responsibility and obligation Norway has.

For me and for all advocates of the just climate issue, Norway and fossil states like it, bear responsibility for the tragedy and climate heritage of the world. A just transition is a right to which Norway must abide, including commitment to finance losses and damage. Such financing must come within the framework of moral and legal responsibility. In close contact with the historical dimension of the climate crisis, climate finances is a legal obligation and not a “gift”, because whoever causes the crime must bear its consequences.

Norway must stop the production of fossil fuels because you are causing climate crises and disasters in states of the global South and floods in Nigeria, Pakistan and Sudan. I understand that the transition is particularly difficult with almost the entire people's dependence on the oil and gas sector, but it is not impossible. Clean alternatives can be available if they are determined to do so, and also it is illogical and unethical for Norway to produce and use clean means in its own country while exporting gas and oil to other countries.

Do you have a message to the Norwegian government?

Stop fossil activity, support the equitable transition project in your country and stop producing oil and gas because every barrel you produce means causing a climate disaster and that history will not forgive you.

You must also assume your historical, moral and legal responsibility to finance loss and damage. Especially as a country contributing to the climate crisis through your fossil activity, which has escalated and extended especially in the current period.

I hope that the Norwegian government will adopt this approach because it is the only way to achieve justice for hundreds of millions in the global South, which has not contributed to the climate crisis but has suffered most.