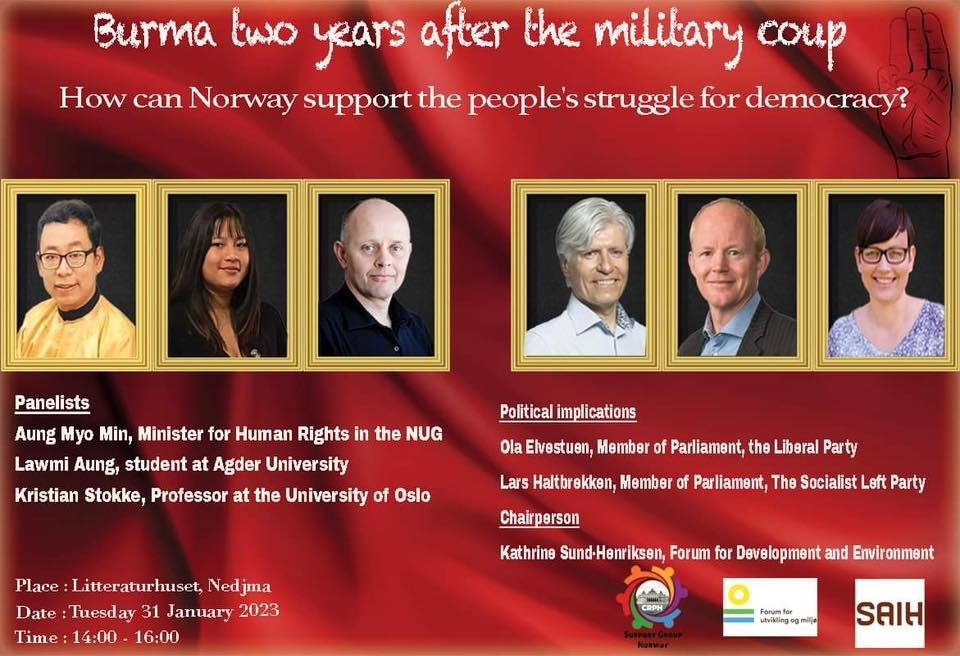 How can Norway support the people´s struggle for democracy?

February 1 marks two years since the Burmese military seized power in a military coup. In those two years, the military has terrorized the population and committed extensive war crimes. The Burmese people have lost their human rights and democracy, and several thousand have been imprisoned and killed. The military's governance failures and warfare have resulted in economic crisis, forced displacement of people and a very severe humanitarian emergency. The military coup has had strong negative consequences for Myanmar's political, economic and social development and has made it clear that democracy, federalism and civilian control over the military are necessary prerequisites for peace and development.

The opposition to the coup has been massive and has taken many forms, including mass protests, civil disobedience and armed self-defense. The popularly elected unity government – the National Unity Government (NUG) – is an important rallying point for the resistance and a natural partner for international democracy support. This is Myanmar's only legitimate government, and has broad support among the population. The US has chosen to recognize the NUG as Myanmar's democratically elected government, and has adopted comprehensive political and financial support.

Myanmar is a focus country for Norwegian aid with the stated aim of supporting democratization and peacebuilding. But many in Myanmar perceive Norway as a weak and unreliable supporter in the ongoing struggle for democracy. Unlike the United States, Norway has not yet recognized NUG as Myanmar's elected government. Unlike Sweden, the Norwegian foreign minister has not invited the Burmese foreign minister for an official meeting. Norway’s humanitarian aid is primarily channeled via areas controlled by the military, and only to a small extent reaches the population in the areas that are hardest hit. Effective aid delivery in these areas requires cooperation with NUG and ethnic organisations, but these are used only to a limited extent as partners for aid. The question is how Norway can more effectively support the people's struggle for democracy?

Since 1991, Norway has been a strong supporter of democracy in Myanmar, but the government chose to align with the military's reform policies and peace process at the expense of political democracy assistance. After the coup, the Norwegian authorities have been very passive in Myanmar. What will it take for Norway to once again play a meaningful role in Myanmar? And how can Norway support the democracy movement politically and financially?

The seminar will be held in English.